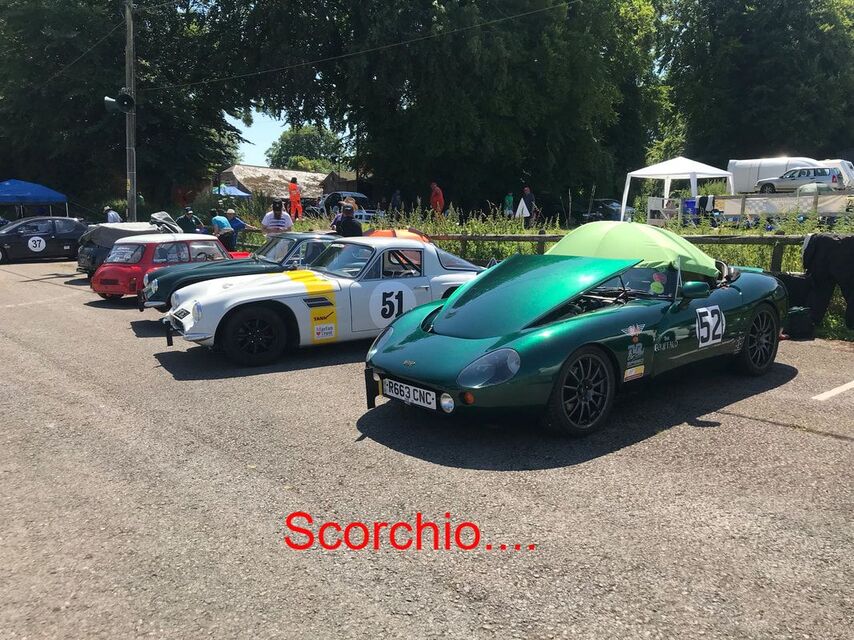 ​The second half of the Wiltshire TVR Speed Championship double-header took place at Gurston Down hillclimb, near Salisbury. Set in the beautiful rolling hills of Cranbourne Chase with a downhill start and a steep climb to the finish, it is a complete contrast to the wide open flat spaces of Castle Combe, the location of the round the day before. Both have extremely quick sections however, with the Chaos data-logger reporting a Vmax of 91.4 mph at Gurston and 115mph at Combe.

In fact, Mr. Chaos (as Hank refers to Mark Everett) was the only contender to compete at both events, with Rob Pack, Alan Davies and Richard Blacklee all having other commitments for the Sunday. Competition was going to be tight though, with Mark Hankins (Hank) and Steve Thomas both making pretty epic journeys to compete at Gurston in their respective Vixens. Hank had been before, but this was to be a completely new adventure for Steve, who arrived nice and early to prepare for his first ever run at one of the fastest hillclimbs in the country.

Former pilot Chaos was flying high after winning the day before, having nicely bedded in his aptly named Michelin Pilot Sport 4 tyres with a personal best at Castle Combe. With 5 litres of power, the Vixen boys were somewhat resigned to slugging it out for second, although Chaos has been known to throw the poor old Griffalo into the scenery on occasion, so nothing was certain.

​After practice 1, the order was Chaos, Hank and Steve, the latter being pleasantly surprised about the layout of the track. Being not much longer than Shelsley Walsh it offers more challenges, with a very quick right-left flick after the downhill start, something the Vixen boys were taking at 70mph plus; not for the feint-hearted. Then a long left hander called Hollow, which really favours the brave, before a dab on the brakes and what can be best described as “chucking it in” for the right hander that leads up to Karousel, the slowest part of the course. After that it’s hard on the throttle and over Bunny’s Leap where it’s oh so easy to spin up the rear wheels, before another dab on those brakes to prepare for the critical left-hander that is Ashes. The exit speed here needs to be maximised for the long drag up the hill to the finish, where it’s still not over, as the timing beam is placed viciously mid-way between another left-right kink; no lifting here until well over the line, otherwise you WILL end up in the field to your left, probably travelling backwards at about 80-95mph, depending upon your TVR weapon of choice.

​Gurston is always brilliantly organised, and all were soon back in their cars for second practice. The order remained the same but, ominously for Hank, Steve seemed to be getting to grips with the hillclimb very quickly, and had closed the gap between them. Lunchtime was most civilised, with a lovely lunch taken at the “Meth Lab” (Hank’s motor home) in the welcome shade of the awning. It was a scorcher of a day, and the respite was most welcome, as were the Strawberries and iced drinks and coffee supplied by Tess, soon to be Mrs. Chaos. Much was discussed over the refreshments, but not a lot to do with hill climbing, and soon it was time to return to the full sunshine for the first of the timed runs. 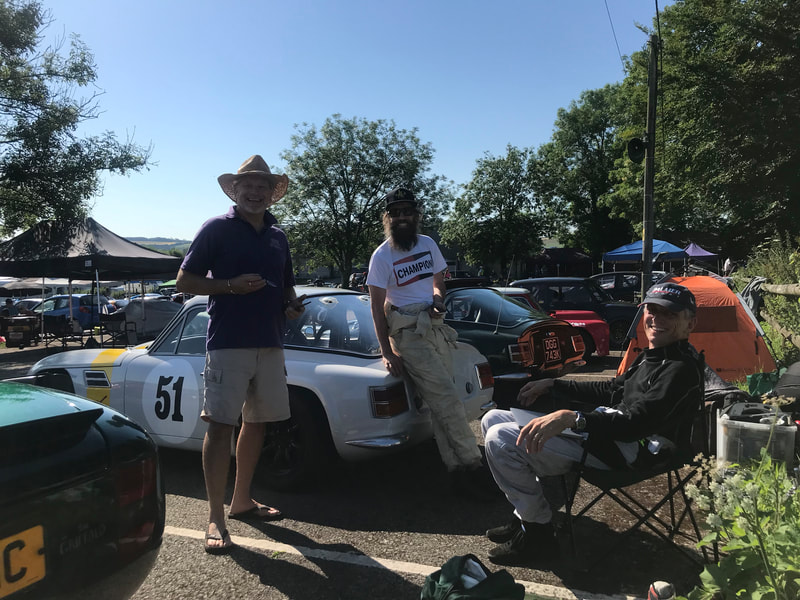 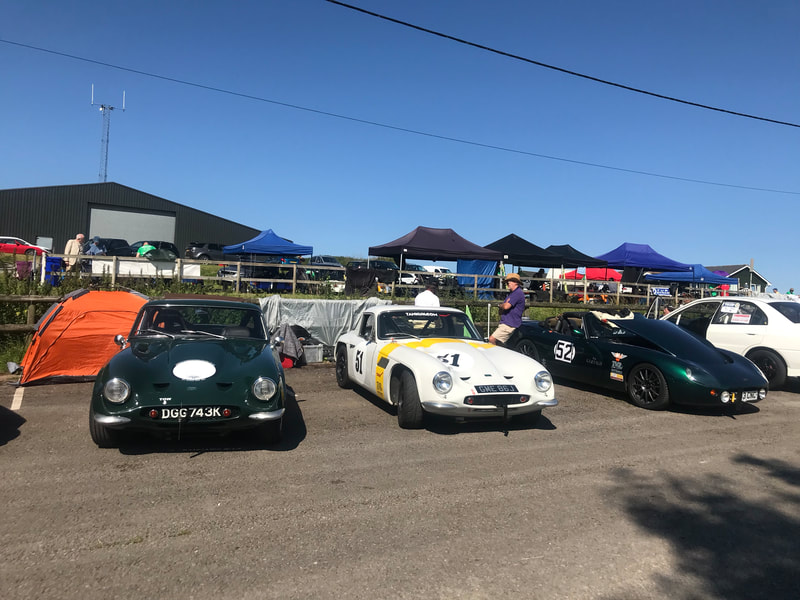 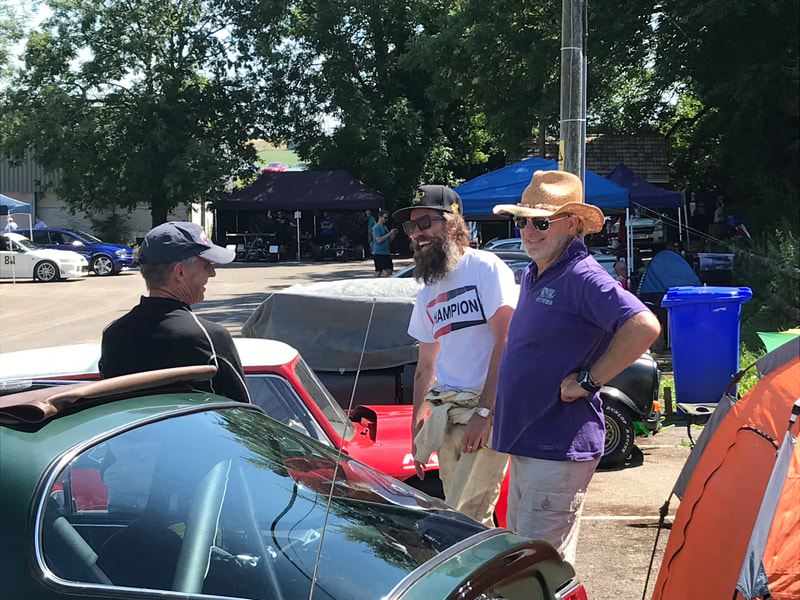 ​Chaos ran the whole day with the Griffalo roof off, but poor Hank and Steve were trapped in their respective Vixen greenhouses, desperately flapping their driver’s doors in an effort to stay cool. After the first timed runs, Chaos was still in front, just a tenth off his personal best, but Steve got within one tenth of Hank’s time, which put him ahead on handicap. Having startedd the day a couple of seconds behind, Steve drove brilliantly to chase Hank down, emulating a certain LH at Silverstone the same day!

Chaos was still piloting the Griffalo a couple of seconds clear, but the battle behind was intense. With Tess running round making sure we were all hydrated and fully sunscreened up, it was soon time for the final run. Chaos took a couple of hundredths off, and Steve went a couple of hundredths slower, but what could Hank do? A big lock-up into Karousel looked like his time had gone away, but on returning to the paddock, it was out with the phone and onto the tsl-timing website to find that he’d gone half a second quicker, but would that be enough on handicap? To Steve’s delight and Hank’s chagrin it wasn’t, Steve just grabbing second by a couple of tenths. A study of the splits later on revealed that Steve had really nailed it through the opening ultra-fast section through Hollow; great stuff!
​With Tess providing well-earned ice creams, it was decided we would all help each other out, and pack up and load the two trailered cars together; great camaraderie. It was made all the more amusing by Tess impressing Hank with her knowledge of trailers and soft-links!

The two Vixen boys set off on their long drives home, whereas for Chaos, it was just a 40 minute hop home via the pub, with a shiny trophy in the boot and a conversation in the cabin of, “where exactly did you learn all that stuff about trailers?”

Go on, stick some numbers on it!