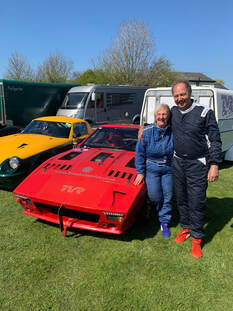 ​ Having not competed for so many months, the week before the season’s inaugural event was spent trying to remember where all the necessary bits and pieces were stored. My race suit went to the dry cleaners at the end of the 2019 season, so, where the hell did I put it!!!!
Checking Demon Tweeks web site to see how much they are to replace quickly encouraged a more detailed search to find the said suit.
Final instructions arrived from Liverpool Motor Club along with lots of extra information dealing with the MSA requirements to meet their Covid Guidance as the governing body.
Signing on was completed online before the Wednesday deadline, along with a compliance form covering key elements of scrutineering. This caused some concern with regards to whether the car’s seats and harnesses were in date, but on reading the MSA blue book for Road Going Classes it was found this was not applicable, so concerns were now alleviated.
Confirmation from the entry secretary was received once the online sign on was checked, and we were ready to rock and roll. Saturday’s weather forecast was for a dry and clear day. Having had this event previously cancelled due to torrential rain this was a good start.
Gates opened at 7am and competitors were allocated a posted slot with car number and even your name. Paddock spacings ensured two-meter distancing, which is possible with Aintree’s expanse of grass around the course. Arrival felt very strange for regular competitors, it was deadly silent, no announcements, no gathering all your papers to sign on, no sitting in anxious anticipation of a MSA scrutineer walking to your pride and joy for inspection. The only job was to put some numbers on the sides of the car if you hadn’t already done so.
There were four full time TVR speed championship members, John Carter, Dave Barrowclough and Michael and Karol Bailey. Michael and Karol were both out for their very first sprint in their newly acquired red Tasmin, a former sprint and Tasmin Championship car.
With first practice out of the way the results at this point were to stand throughout day, with Barrowclough 1st, Carter 2nd, and the Bailey’s 3rd and 4th.
Dave Barrowclough was running 1A rather than 1B tyres which, whilst slower overall, resulted in a personal best (PB) on handicap. John Carter in his well known, and again newly acquired, TVR S3 also achieving a PB.  Karol and Michael Bailey, whilst having done some track day shake downs, had never run in anger. There were smiles as the times tumbled for them both during the day. They seemed to enjoy themselves, with Michael only 0.33 second off the car’s best time from former Aintree sprints.
Liverpool Motor Club run a slick event and with the new pit set up this sprint was even slicker. 10/10 for the team that put this together to give two practices, a first timed run completed before lunch, and a further four timed runs after lunch, although only 3 counted towards our results, but there was plenty of time if wanted on the track.
So, in summary, good weather, good company, a track with lots of run off if it goes wrong, 6 or 7 timed runs on the track, and home by 5pm to earn some brownie points with management 😊
You know you want to! Go and put some numbers on it!