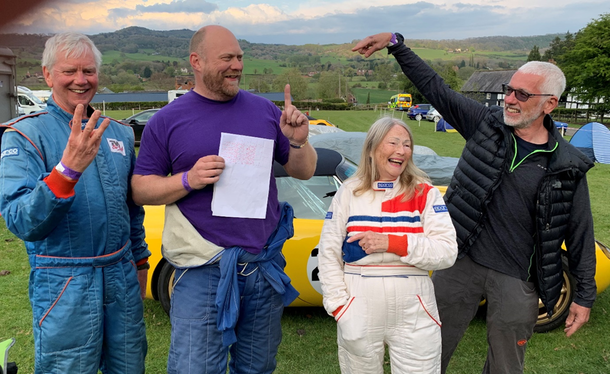 A fine assortment of four TVR’s competed at Saturday’s round, Championship leader Dave Barrowclough’s Chimaera 500, Shelagh Ash’s Griffith 500, Rob Pack’s Tuscan racer and Richard Blacklee’s Chimaera 450. The lack of quantity was arguably made up for by quality as the combatants fought it out on the track and swapped places for first and second, and third and fourth, as the day progressed.
Dave, Rob and Richard were returning to this iconic venue after a few year’s absence, whereas Shelagh and Pete Ash (Pete was driving on Sunday) are regulars, being members of Midland Automobile Club. Walking up the 1,000 ft hill reminded the newbies that it is indeed a serious climb, one in six in places. We felt for any little children living in the house at the top who might have to use this steep and narrow lane to reach the school bus.
Having successfully negotiated the peculiarities of online sign on and scrutineering, we fruitlessly searched the paddock plan for our parking spots. Instead, we found we had been allocated a roped off area in the spectator car park and camping ground, the event being of course devoid of spectators due to the dreaded covid. Apart from being a bit isolated from the action it was not a bad spot, and the views of far hills were magnificent. One or two competitors from the other classes kindly walked up to say hello from time to time. The weather forecast for Saturday looked promising, with the BBC forecasting only a 20% chance of rain at midday.
As usual the TVR class ran towards the back of the field, but the entry list was not excessive, despite including quite a lot of motorbikes. The event started promptly at 8.45am and we completed our first practice in good time for breakfast. We even anticipated the likelihood of being offered a third afternoon run. Some of the Sunday competitors were then slotted in to practice as well, and two hours later we were still awaiting a call to the line. Several competition machines apparently hadn’t moved from storage for the past eighteen months and were proving mechanically unreliable and held up proceedings. Eventually we moved down to the paddock and were close to the front of the queue when there was an incident with a single seater, leading to another hour’s delay as a tyre wall was rebuilt. Joking that they were holding us back until it rained backfired somewhat when it did, and wipers were needed for the second practice run.
After another three hours wait, mostly in pleasant sunshine, we lined up for our first timed run and the same thing happened. It wasn’t too bad for the Chimaeras and Griff, but poor Rob has no roof on his Tuscan racer. Wiping the inside of his visor as the lights changed to green Rob mistakenly engaged third gear. His partner Amy, waiting in the van, had found a timing app on her phone and was able to inform Rob that he had dropped a couple of seconds to the 64ft mark.
Around the time we would normally be expecting to pack up and go home, and many had, we were called down for our final run. We had lost interest in talking about the variable conditions by then and just got on with it. From memory it was spitting rain following a period of grey skies, but the track was dry enough and times improved. Shelagh, Dave and Rob made great improvements of over a second, and Rob was overjoyed to achieve a very well-earned win with a personal best time of 35.12.
The sense of achievement at the end of a very long day was immense. It was great to have the satisfaction of having made the effort to do something worthwhile after the dark months of lockdown. Richard headed off back to Northampton in the evening rain, whilst the others made for Rob and Amy’s house in Worcester and a well-earned curry. 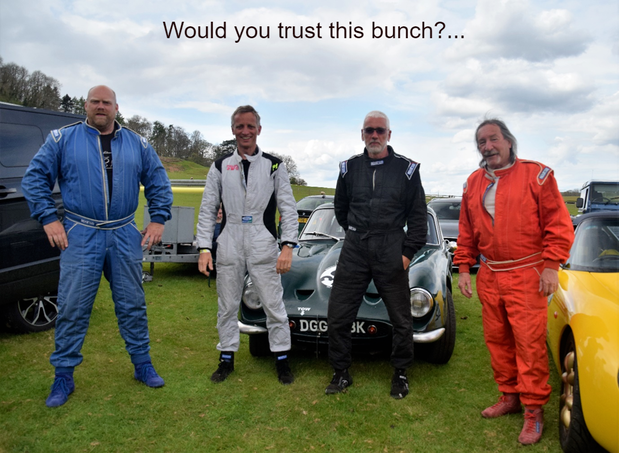 Sunday was a fabulous day, close competition, great fun and good weather. Again, there were four entrants, Richard’s place being taken by Steve Thomas in his Vixen S3, whilst Pete took over driving duties from Shelagh in the Ash family’s Griff 500. Peter Dobson was entered with a Vixen, but withdrew at the last minute as his car wasn’t finished in time. This caused great confusion with administration as they mixed up the two Peters and withdrew the incorrect entry. The commentator then referred to Pete Ash as Shelagh all day, which he didn’t find particularly amusing!
Amy had to go to work on Sunday so wasn’t able to provide the helpful sector times and speeds using her phone. Her expertise was sorely missed as due to the mix up with entries Pete’s times didn’t appear alongside the others in the TVR class, and took some finding in another place altogether.
Weather conditions were better than Saturday, and although there were plenty of dark clouds in the sky only a few raindrops fell on Shelsley. Sunday was always going to be a long day with the single seater run offs, and so it proved.
Another new personal best of 34.79 for Rob in the first timed run was enough to secure the win, for both he and Dave were slower with their final attempts late in the day. Pete and Steve were not far behind although Pete wrecked his chances of banking a time in T1 when he selected fifth instead of third out of Top S.

On Sunday all the competition was for the top spot, and it was even closer than the day before. Rob Pack creamed it again, but Dave Barrowclough was a mere quarter of a second behind on handicap. Steve Thomas and Pete Ash were not that far behind and it could have been anyone’s day. Rob now has a perfect score of 50 points, although Dave remains at the top of the leader board after his Aintree win. With several of the top hitters not yet in action, what an exciting season 2021 promises to be.